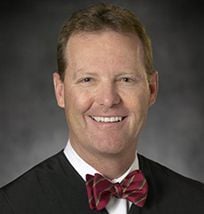 Outside of the courtroom, Judge Taylor enjoys spending time with his wife, Hon. Laura S. Taylor, who presides over the United States Bankruptcy Court for the Southern District of California.  He also enjoys spending time outdoors, and he regularly goes fishing at local lakes throughout San Diego county.  It was a pleasure meeting with Judge Taylor to learn about his time on the bench and his thoughts about new attorneys who are learning to navigate the practice of law.

Judge Taylor held an active civil litigation practice at Sheppard Mullin, where he worked on cases involving securities issues, antitrust issues, and civil rights litigation.  After working at Sheppard Mullin for 20 years, however, Judge Taylor decided that he wanted to explore the law a little deeper, and he believed that working as a judge on the bench would give him the opportunity to do that.

After Governor Schwarzenegger appointed Judge Taylor to the bench in 2005, he began his judgeship by initially working on criminal cases.  At that point in time, Judge Taylor had limited experience working in criminal law, which meant that he needed to learn an entirely new practice area and make big decisions that would significantly affect the lives of people appearing in his court.  The prospect of learning new areas of the law, and learning a different way to look at the law, inspired Judge Taylor to become a judge.

Judge Taylor believes that attorneys should always be fair to each other, and young attorneys should learn that nobody benefits from taking advantage of each other.  The practice of law necessarily involves an adversarial environment.  When you are assigned to a case as a young lawyer, the attorney on the other side of your case will necessarily be your adversary.  When dealing with situations where you have an adversary on the other side of your case, always remember not to be petty.  All attorneys have a job, even ones opponent.  While young lawyers might be each other’s adversaries, Judge Taylor thinks that they should treat each other with respect and professionalism.  If the young lawyers can shake hands at the end of the case and walk away feeling like they learned something new, those are the kinds of cases that benefit young lawyers the most.  Judge Taylor had several cases like this when he was a young lawyer.  To this day, some of his opponents from these types of cases are his friends today.

The bottom line is to always be fair to your adversary, and do not do things that would take unfair advantage of your opponent.

Judge Taylor’s Advice for Attorneys Appearing in His Court

If you have a hearing in Judge Taylor’s court, show up on time, and be prepared.  Also, if you are facing an adversarial situation, do not take an unreasonable position.  Always show decorum and respect for the bench, and do not interrupt the judge.

As far as being prepared is concerned, if you appear before Judge Taylor’s court, make sure that you know your case.  Do not show up without knowing the basics (i.e., the parties and issues of your case).  Judge Taylor has had too many experiences where attorneys appear before his court for a hearing like a Case Management Conference, and they do not have any idea about what is going on in their case.  When this happens, the attorneys appearing before his court cannot make any recommendations on how to proceed, and the hearing is an unproductive exercise for everyone.

If you appear before Judge Taylor’s court, make sure that you review your file, and also, have a plan for your case, preferably one that leads to a trial.