Mobile giving has been growing in popularity for the past decade. It first emerged as a powerful fundraising tool in natural disaster relief actions, like the Red Cross’ “Text2HELP” campaigns. In 2005, the first such campaign raised close to $115,000, exceeding expectations by almost 200%[1]. At the time, experts predicted that “text-messaging could become the next fundraising revolution” [2].

Ten years later, in 2015, Americans donated $3.6 billion through mobile devices (14% of all donations made in 2015[3]). Not quite a full-scale revolution, but there’s a lot of room for growth: In an environment where 84% of nonprofit donation pages are not mobile-friendly, organizations continue to miss out on an estimated $6.5 billion in mobile donations[4].

That was the situation the Justice & Diversity Center (JDC) of The Bar Association of San Francisco faced last year. Its biggest fundraising event of the year – the annual JDC Gala - was quickly approaching, but without mobile-friendly donate pages, it was unnecessarily difficult for donors to sign up for sponsorships or to make live donations during the event.

After researching different mobile giving options, JDC signed up with MobileCause[5], primarily for its text-to-donate capabilities, which were put to good use during the annual gala. That evening, guests contributed more than $10,000 by texting pledges from their smart phones.

MobileCause helped remove technological barriers during the event and made donating as easy as sending a text message. However, preparation and people power proved to be key to using MobileCause effectively. To that end, JDC displayed mobile giving instructions and stationed giving ambassadors with iPads throughout the room, ready to help any guest with making a gift. Most importantly, however, was the Master of Ceremony. He made the text-to-give portions of the evening fun and engaging. (see event photos).

Since the gala, JDC has discovered more uses for MobileCause. In addition to its text-to-donate feature, MobileCause offers online giving tools, such as customizable donate forms that are easily embedded into existing web pages. To make up for the lack of mobile-friendly donate pages on its website, for instance, JDC created one of these MobileCause donate widgets for its year-end individual giving campaign and embedded it into a WordPress page set up especially for the campaign. This gave donors a mobile-friendly way to donate and resulted in significant contributions (7% of all campaign donations – approximately $16,500).

Mobile giving is a tool, not a cure for lackluster donations. As with any tool, it is only as effective as the person wielding it – to get the most out of it, with the least amount of error, takes preparation and practice.  It takes time and effort to educate donors, especially those who have never made a mobile donation before. However, once donors are introduced to mobile giving, especially in a fun, interactive setting like a live event, organizations can start collecting their slice of the multi-billion dollar mobile giving pie. 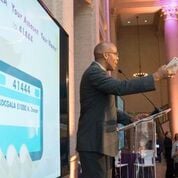 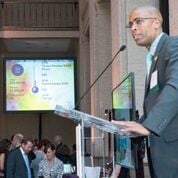 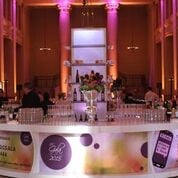 All photos by Jim Block

Image 1: 2015 JDC Gala Master of Ceremonies Paul Henderson, deputy chief of staff for San Francisco mayor Ed Lee, demonstrates how easy it is to participate in the text-to-donate campaign

Image 2: A fundraising thermometer in the background shows real-time progress on the text-to-give campaign, displaying donor names and comments as the evening progresses.

Image 3: Text-to-donate instructions were incorporated throughout the venue, including the bar, here shown during set-up.