The most adept leader may be the one who has walked many paths and found each fascinating. An example of such a curious explorer is Sharon Nolan, Director of Marketing at the Chicago Bar Association – and the recipient of the E.A. “Wally” Richter Award at the 2016 NABE Communications Section Workshop. As the October 2017 Workshop in St. Louis enters its final planning stages, and decisions are being made about this year’s Wally honoree, we caught up with Sharon to ask about the field of communications – and why she originally left the Chicago suburbs to start a new work life in the Windy City.

“All I wanted to do was work downtown so I could live down here with my girlfriends,” Nolan says with a laugh. “And somehow I ended up staying.” Though her jobs have changed, her love for the Chicago Loop never waned – she’s been at the Chicago Bar for 20 years. 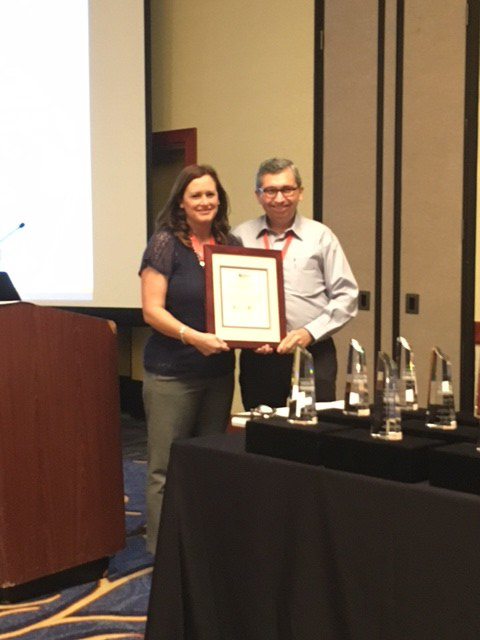 All communicators believe they have demanding customers, but Nolan’s first job out of college prepared her to roll with the hardest punches.

“I worked for the city of Naperville in the mayor’s office in his PR department. We did all his press releases, hometown events, parades. We covered it all, so that was kind of how I got my start.”

The job required wearing many hats, from dealing with citizen complaints to speaking with local media about mayor and council decisions. “It was literally everything,” she says.

Her path to the world of bar associations had another lucky precursor when she worked as a packaging specialist – not packaging as in marketing, but as in literally designing packaging for office supplies. When Office Max or Office Depot wanted to carry an off-brand piece of equipment – think laminators and staplers – those items needed to be branded and packaged for resale. The company she worked for was “kind of like the generics of the office supply world.”

It’s the daily job of the communications pro to create print and digital products, but Nolan liked the opportunity to custom-create things that slipped into the stream of commerce.  She says she enjoyed working “where you visually saw what you created come to life on a piece of paper or a piece of cardboard. It was neat to see what you designed on the shelf selling retail.”

What she has brought to life for the past two decades is the brand of the Chicago Bar Association. She started marketing there for the lawyer referral service and then went into the young lawyers section. Soon after, she earned her MBA, and has been Director of Marketing for about 15 years.

Nolan attributes her interest in NABE to her bar’s Executive Director, Terry Murphy (who was NABE President in 1989-90), who “has always been super supportive of anybody being active in NABE.” She names many colleagues who “spurred me forward” and proved NABE’s value to her, including the New Hampshire Bar’s Dan Wise and Kevin Ryan, now Executive Director at the Monroe County (N.Y.) Bar Association (and a former Wally honoree himself).

“But I would have to say Francine Walker was someone whom I emulated to be like. She really got me involved.”

“She’s a good mentor,” Nolan adds of Walker, the Florida Bar’s ‎Director of Public Information. “She has influenced a lot of people to get involved.”

Nolan’s colleagues say the same of her.

Russell Rawlings, at the North Carolina Bar Association, marvels at the way Nolan “took the lead on chairing the highly successful Orlando Workshop and kept the event on track from start to finish. The local bar, which provided us with boots-on-the-ground support and contacts, underwent a leadership change in the year leading up to the event. Undeterred, Sharon never missed a beat in making sure every detail was taken care of.”

Section Chair Heather Folker says, “I’ve worked with Sharon for several years on the Council and Workshop planning. I consistently see her generously offering her time and expertise to NABE and the Section. Best of all, she’s a joy to work with!”

“Sharon has always been there for me with a quick smile and willingness to help in whatever I needed her for. Her expertise in Workshop planning was especially helpful as we planned the Savannah workshop. The bar world is certainly lucky to have her.”

“In addition to her Workshop planning, Sharon has been a strong advocate for the Section as a member of the NABE Program Committee,” says the 2011 Wally Award honoree. “When you attend a communications-related presentation at the NABE midyear or annual meeting, you can be sure Sharon had a hand in it. ‘Big’ NABE relies on her talent and hard work as much as we in the Section do.”

“She has a rare combination of creativity and calmness,” says Dan Wise. “She is someone who’s very good at making people feel they are being heard, while still managing to make sure the trains run on time and things get done.”

Over the years, Nolan says, the Section has evolved just as communications has.

“As the Internet has exploded and taken over, the definition of communications has become much broader and encompasses so many different things now. It’s a little bit of everything.”

Today, she says, comms pros must be adept at many skills. They all have to be able to say, “I do a little bit of publications, a little bit of marketing, communications, web site work, email marketing, social media. It’s become such an intertwined configuration.”

Asked what’s occurring in marketing that she never would have expected 20 years ago, Nolan points to the rise of video and social media “and how for not very much money you can do so much.”

“I think if you have the human capital, you can do pretty much anything now. It’s just having the right sort of people to execute.”

The right sort of people in Sharon’s personal life are her children, 13-year-old Madeline and 11-year-old Jameson. Her husband Jason is a technology consultant.

Decades after her Parks & Rec stint in a mayor’s office, Nolan says she still appreciates the variety of that job’s duties, which she describes as “sort of a segue into working in an association.” And she is ever willing to assist colleagues in those obligations. As former Section Chair Russell Rawlings adds, “I cannot to this day recall ever having to ask Sharon to do anything; she already had it done before it ever crossed my mind.”

Today, as she continues to excel in the role of crafting and packaging messages – and lending a generous hand to others – Nolan remains an exemplar of the Wally Richter Award and the Communications Section.